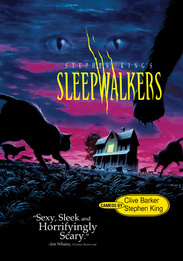 Only Stephen King, the dark genius behind Misery, The Shining and Pet Sematary, could have written Stephen King's SLEEPWALKERS, a classic horror story that takes a perfect Norman Rockwell town and turns it inside out. Brian Krause and Alice Krige star in this terrifying tale of modern-day vampires who prey on virtuous young women. Madchen Amick plays the sexually curious virgin who falls for the new boy in school (Brian Krause), only to learn too late that he's a life-sucking Sleepwalker. Mutating at will from golden boy to savage monster, Krause stalks Amick to feed his seductive mother. As the tension mounts (and the casualties pile up), the town's tabbies gather for a final, chilling showdown with the monsters in their midstâ and we all know it's not nice to hurt people's felines... With cameo appearances by Stephen King and Clive Barker.