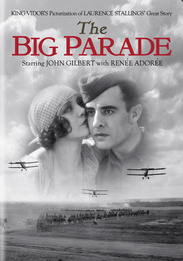 One of the most moving and impactful depictions of war, director box-office hit, set the bar first and set it high. King Vidor's remarkable silent classic is presented here in a revelatory 4K digital restoration from the rediscovered original camera negative. Wealthy James Apperson (John Gilbert) deploys as a soldier in World War I France and grows from a naive kid into a battle-hardened veteran as he and his two buddies are paraded toward the front. The film fiercely captures the heroism of the ordinary foot soldier struggling to survive, and how James' determination to return to the village girl (Renee Adoree) he loves faces the ultimate test. Other great war epics would follow, but The Big Parade, a bracingly human and brutally vivid