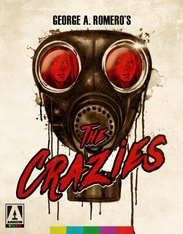 OF THE LIVING DEAD comes this chilling film about biological warfare. Made in the shadow of both Vietnam and Watergate, THE CRAZIES is a grim allegory about a government conspiracy against the public that ultimately results in genocide. The story is set in director George Romero's home state of Pennsylvania. In the film, a government plane carrying a dangerous virus crashes near the small town of Evans City. The virus finds its way into the town's drinking water, turning everyone who is exposed to it into a murderous lunatic. Firefighter David (Will McMillan) and his pregnant wife, Judy (Lane Carroll), remain unaffected but face great danger in trying to escape the town, which has been quarantined by the US army, whose members lurk around every corner, clad in gas masks and protective suits. The President is often depicted as a detached talking head, offering no hope to citizens trapped by the mistakes of his administration. Similar in tone and structure to his DEAD trilogy, Romero's film overcomes a visibly limited budget to create a colorful 1970s genre film that neatly captures the feeling of governmental distrust that was characteristic of the Vietnam era. With both a social message and plenty of splatter, THE CRAZIES is an underrated but appealing horror film.