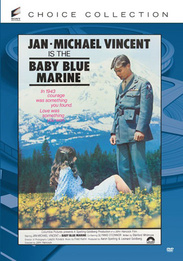 During World War II, Marion (Jan-Michael Vincent, The Mechanic, 1972) fails out of basic training from the Marines and is forced to wear a light blue uniform, signifying his standing. On his way home, Marion has his clothes taken during a mugging by a marine looking to stay out of being commissioned again. Left with only the mugger's marine uniform, Marion wears it and is mistaken for a war hero in a small town where several boys are being shipped out to fight. There, Marion meets Rose (Glynnis O'Connor, The Boy in the Plastic Bubble), and the two fall in love. Also featuring Richard Gere (Pretty Woman), Bruno Kirby (Donnie Brasco) and Katherine Helmond (TV's "Soap"), BABY BLUE MARINE is a compelling drama.