The Fish That Saved Pittsburgh 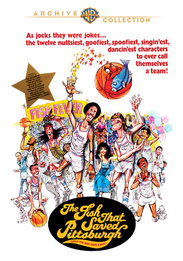 The Dr. will see you now. Basketball's Dr. J -- Julius Erving -- operates on the competition in this hoop-it-up disco-era fantasy about a team on a winning streak when it signs up motley players born under the zodiac's fish sign of Pisces. Will the Dr. in the house, trademark cloud-walking, net-shredding slam dunks are plentiful. More hoops excitement follows as the Harlem Globetrotters' Meadowlark Lemon handles the rock as if he had more arms than an octopus and Kareem Abdul-Jabbar shows his winning style as well. Off the court, Flip Wilson is a beleaguered coach and Jonathan Winters plays the dual roles of an ill-natured mogul and a sweet-natured nitwit. The world isn't round in The Fish That Saved Pittsburgh. It's round ball. Fish fever -- hook it!