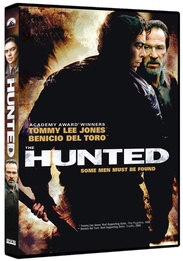 BACK ON DVD! Haunted by the nightmares of killing he experienced in Kosovo in the past, Aaron Hallam (Academy Award-winner Del Toro) has turned into a top special-forces assassin...gone renegade. And when game hunters in the Pacific Northwest are being targeted and viciously slain, the FBI realizes that the indiscriminate murders are the work of no ordinary thrill killer. They turn to the one man who can track Hallam down and bring him in - skilled former warfare instructor L.T. Bonham (Academy Award-winner Jones).