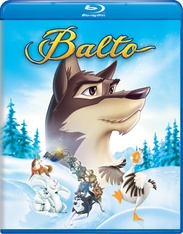 Set against the breathtaking landscape of the Alaskan territory, the film follows he heroic journey of Balto, half husky/half wolf. The town outcast, Balto courageously battles the forces of nature and his own self-doubt in a race to save the children of Nome. It's 1925 and a serious diphtheria epidemic is spreading fast among children, but a terrible blizzard has paralyzed the primitive air, sea, and rail routes... dog teams are Nome's only hope to receive much needed medicine and avert disaster. Based on the Great Race of Mercy to Nome in 1925, Balto combines spectacular action and adventure with the heartfelt emotion.