The Sun Comes Up 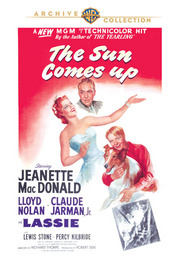 Fondly remembered for the series of film operettas in which she starred opposite Nelson Eddy, Jeanette MacDonald gives her farewell film performance in this tender and touching tale that features everyoneâs favorite film canine, Lassie. Director Richard Thorpe (The Great Caruso) and screenwriters William Ludwig and Margaret Fitts tell the story â based on Marjorie Kinnan Rawlings, author of The Yearling â of a widowed concert singer who seeks solace in the mountain country to forget the tragic loss of her teenage son. Embittered, she blames Lassie, her sonâs pet, for the fatal accident. But the love of the collie by a local orphan boy played by Claude Jarman, Jr., whose memorable performance in The Yearling won him a special Academy AwardÂ®, melts her hardened heart and rekindles her desire for life. Stunningly photographed in northern Californiaâs Santa Cruz mountains, the film features five songs by Miss MacDonald, plus some truly delightful comic byplay from Percy âPa Kettleâ Kibride and Margaret Hamilton as a mountaineer woman.