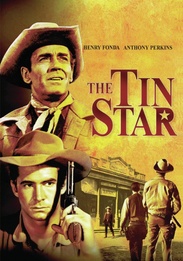 Henry Fonda and Anthony Perkins headline "The Tin Star," a tough-minded, character-driven western nominated for an Oscar for its story and screenplay. Perkins plays Ben Owens, a greenhorn sheriff who hasn't worn his badge long... and won't live to wear it much longer unless he gets some savvy help. Fonda, bringing to his role the presence and plain speaking that made him an icon of the cinematic West, plays wily bounty hunter Morg Hickman. "A decent man doesn't want to kill," Morg counsels Ben. "But if you're going to shoot, shoot to kill." Morg backs up his words with action. And when the time comes, so will Ben.