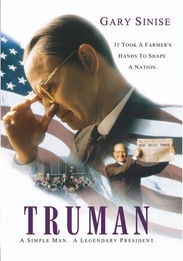 Gary Sinise is "Give 'em Hell" Harry, a simple man of the people who became one of America's greatest presidents. Through victory in the second World War and the beginning of the Cold War, through the birth of the United Nations and his decision to drop the first atomic bomb, Harry Truman lived by the premise that "the buck stops here."