Why Do Fools Fall In Love 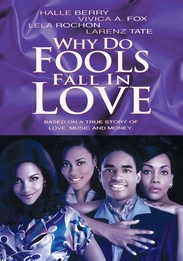 Three beautiful women visit record executive Morris Levy with one thing in mind: to claim the music royalties earned by their husband, the late, great '50s rock icon Frankie Lymon. They say good things and bad news always travel in threes: Looks like the talented, troubled Frankie left more than his music behind. Heart, humor and three-part disharmony reign as the three wives maneuver to one-up each other and claim the estate. Halle Berry, Vivica A. Fox and Lela Rochon play the very different women who discover they have something in common -- the same husband (Larenz Tate). Gregory Nava (Selena) directs, chronicling a song-filled (over 30 soundtrack tunes) rags-to-riches-to-ruin story of Lymon through the women's relationships with him. Why Do Fools Fall in Love? For movie fans, the answer is, why not!

Rated R for language and some sexuality.