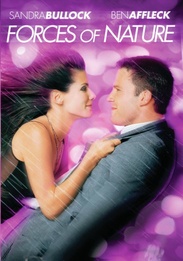 It's only two days before his wedding when Ben's (Ben Affleck) plane skids out of control, leaving him stranded in New York with no way home to his nervous fiancee in Savannah. Against his better judgment, the reliable groom-to-be hitches a ride with free spirited traveler Sarah (Sandra Bullock) setting off the year's most riotous road trip. At first, these two opposites attract nothing but trouble in a sidesplitting series of comic mishaps and unnatural disasters. But an irresistible attraction and the forces of nature threaten to detour them forever in this sexy, whirlwind adventure Jeffrey Lyons (WNBC--TV) declared, "a fun, hip ride" one you'll never forget.

Rated PG-13 for sensuality, language and a scene of drug us.