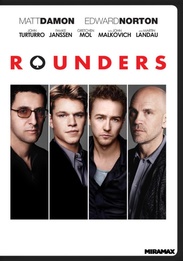 Academy Award winner* Matt Damon (Bourne franchise), Edward Norton (The Grand Budapest Hotel ), John Malkovich (Bird Box) and John Turturro (Transformers: The Last Knight ) lead an acclaimed cast in a gripping story about competition, rivalry and the high price of friendship. After suffering a huge setback in a high-stakes poker game, Mike McDermott (Damon) promises to lay down his cards for good, but when his best buddy (Norton) gets in over his head with a ruthless underground club owner, Mike's loyalty draws him back into the game.

Rated R for pervasive strong language, some sexuality and brief drug use..