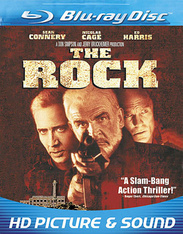 Brigadier General Francis X. Hummel, a legendary military hero, and his crack team of commandos seize control of Alcatraz, taking a group of tourists hostage. They threaten to launch poison gas missiles on San Francisco if their demand of restitution for their families of his men who lost their lives during highly covert military operations are not met. The city's only chance for survival is FBI chemical weapons expert Stanley Goodspeed and a federal prisoner, John Patrick Mason, who also happens to be the only convict known to have escaped the island prison. With the clock ticking, they embark on a desperate bid to sneak into the island and detoxify the weapons before disaster strikes.

Rated R for strong violence, language and a sex scene.