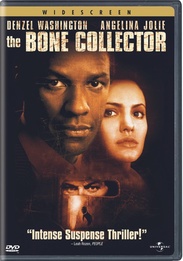 The Bone Collector is a shattering suspense-thriller in which two cops on the trail of a brutal serial killer must see as one, act as one and think as one before the next victim falls. Rymes (Washington) is a brilliant detective paralyzed on assignment from a fallen beam. Donagy (Jolie), is a felsy street-smart policewoman who must be his eyes and ears and capture the killer before he strikes again.

Rated R for strong violent content including grisly images, and for language.