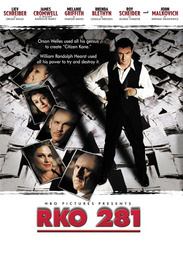 The Orson Welles directed RKO 281, now known as "Citizen Kane", was loosely based on the life of newspaper publisher William Randolph Hearst. But not so loosely that he didn't want it destroyed before the public could ever see it. The struggle that ensued and the lengths he went to - from threats to sexual bribery and more - are revealed in RKO 281: The Battle Over "Citizen Kane".