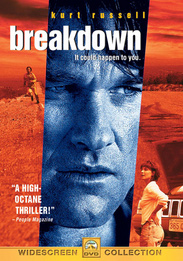 Jeff and Amy are driving from Massachusetts to San Diego to start their new life. As they cross the western deserts, however, their truck breaks down. They're in luck, though, when an eighteen wheeler stops and Red Barr offers to help. Jeff doesn't want to leave their truck due to a recent run in with Earl, a local he nearly crashed into. So Amy accepts a ride with Red saying she'll meet Jeff later at a local diner. Things get worse when Jeff finds Red who claims he's never seen him or Amy before in his life and another local, Billy, claims the police are involved. From that point on, Jeff finds out who's responsible and then takes action to safely get Amy back.