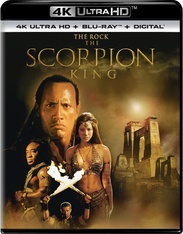 The last member of an ancient Egyptian tribe known for their skill as assassins is called upon to defend Egypt from a tyrant bent on taking over the throne. The tyrant relies on a beautiful visionary who tells him when and where to attack, thus securing victory every time. The assassin kidnaps the visionary and confronts the tyrant in a legendary battle.

Rated PG-13 for intense sequences of action violence and some sensuality.