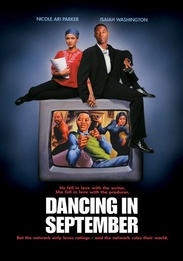 A major TV network looking for a way into the hot urban market hires their first black executive. For George it's a great opportunity to prove he's got what it takes. George brings in Tomasina, a writer with vision, and she in turn brings him a hit new comedy series. Together, they manage, as their young star says, to "Keep It Real", and they soon find the excitement of working together pays off in the boardroom and the bedroom. But when the ratings begin to slip, so does their relationship, and the distance between keeping it real and selling out gets shorter and shorter.