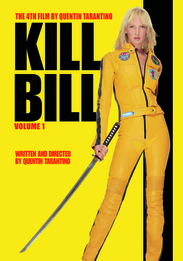 A pregnant woman, who is a former assassin, is critically injured on her wedding day by her former employer and cohorts. After spending four years in a coma, she awakens with one thought on her mind, revenge.

In Volume 1, the Bride tracks down former assassins O-Ren Ishii and Vernita Green leaving a wide trail of carnage in her wake.