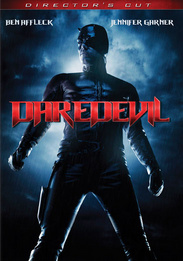 The story of Matthew Murdock who is struck blind by a radioactive isotope. He gains a super radar ability and uses his powers to fight crime in New York. From the Marvel comic bock of the same name.

Rated PG-13 for action/violence and some sensuality.