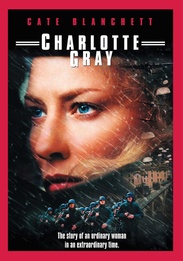 Charlotte Gray's World War II assignment could be the first of many. Or her fatal last. The people she meets could be friends. Or insidious traitors. Trained to be an undercover courier for England, Charlotte straps on a parachute and falls from the sky into Vichy France. There she will assist the French Resistance in its defiance of Nazi occupation. Only one out of three couriers will return home. Cate Blanchett enthralls as Charlotte, who goes behind enemy lines while keeping secret her personal mission to find her lover, an RAF pilot downed over France. And Gillian Armstrong (Mrs. Soffel, Little Women) directs a sterling cast that includes Billy Crudup (Almost Famous) and Michael Gambon (Gosford Park).