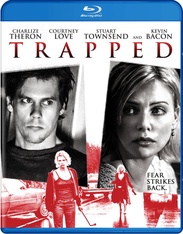 From the producer of Thelma & Louise comes a white knuckle, edge of your seat thriller starring Charlize Theron (Snow White and the Huntsman), Courtney Love (The People vs. Larry Flint), Stuart Townshend (The League of Extraordinary Gentlemen) and Kevin Bacon (X-Men: First Class). When their daughter is taken for ransom by a gang of serial kidnappers, a young doctor and his wife find themselves held hostage while a 24-hour plan to extort their money is set into motion. With time running out and the health of their asthmatic daughter at serious risk, they find themselves in a race against the clock as the âperfect crimeâ begins spiraling towards an unthinkable, terrifying and deadly conclusion.