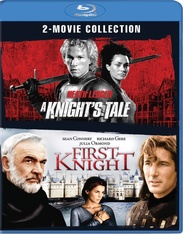 A Knight's Tale
The timeless tale of William (Heath Ledger) and his band of medieval misfits - including serious, soft-hearted Roland (Mark Addy), hot-headed, flame-haired Wat (Alan Tudyk) and unemployed writer Geoff Chaucer (Paul Bettany) - careening towards impossible glory, A Knight's Tale is the oddball, sometimes awe-inspiring story of a rookie discovering if he is the stuff of which legends are made. Part road trip, part romance, part exuberant action-adventure, the film is a rich, romantic, raucous ride during which a young squire embarks on a quest to change his stars, win the heart of an exceedingly fair maiden (Shannyn Sossamon) and rock his medieval world.

First Knight
King Arthur loves Guinevere and tries to keep her from the clutches of Lancelot and a land-grabber.