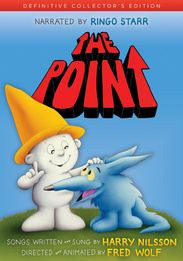 "The Point" is a children's animated story by Harry Nilson and narrated by Ringo Starr about a boy named Oblio and his dog Arrow. They are banished from the Land of Point to the Pointless Forest. Through their adventures, they gain an understanding ofthe world and their place in it.