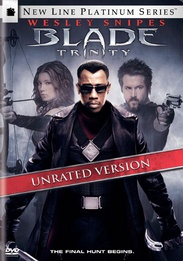 When the FBI starts to investigate Blade's vampire hunting tactics, he's forced out into the daylight and recruited to work with a clan of human vampire hunters called The Nightstalkers.

Along with two gifted Nightstalkers, Blade follows a fresh trail of blood that may lead all the way to the original vampire -- Dracula.

Rated R for strong pervasive violence and language, and some sexual content.