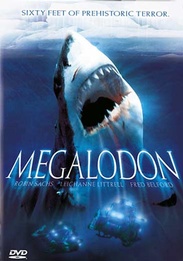 Leading a search for new oil reserves turns out to be more than just a normal expedition for Nexecon Petroleum CEO Peter Brazier. Invited to document the trip to the freezing North Atlantic are news reporter Christen Giddings and her cameraman Jake Thompson. Their job is to prove the safety of a powerful drill called the Colossus. Once in use, the drill is able to tear through a seabed and ultimately hit a rich, undiscovered oil deposit. But when the machine also ruptures a fissure, reveals a second ocean that has existed for millions of years. In this second ocean lives prehistoric life which is now threatened the poisons released from the oil. As the drill begins to fail, an eleven-ton creature rears it's head and begins to stake its claim. The Carcharodon Megalodon, ancestor of the Great White Shark comes back to life to destroy anything and everyone in its way.

Rated PG-13 for some adventure violence and peril.