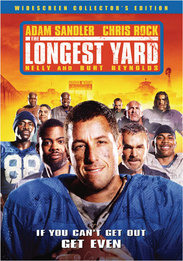 The Longest Yard is the story of pro quarterback Paul Crewe and former college champion and coach Nate Scarboro, who are doing time in the same prison. Asked to put together a team of inmates to take on the guards, Crewe enlists the help of Scarboro to coach the inmates to victory in a football game "fixed" to turn out quite another way.