The Best of the New Scooby-Doo Movies 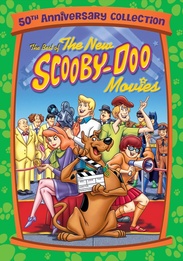 Kids who fell in love with the original Scooby-Doo, Where Are You? TV series were growing up and could now enjoy more sophisticated plots and characters. So along came the hour-long The New Scooby-Doo Movies, and what sets them delightfully and hilariously apart is the marvelous lineup of celebrity guest stars - The Harlem Globetrotters, Dick Van Dyke, The Three Stooges, Jonathan Winters, Don Knotts, "Mama" Cass Elliot, and Laurel and Hardy, plus the participation of other animated action heroes like Batman and Robin and Speed Buggy. This 4-Disc Deluxe Set with Stardusted Special Features presents 15 of the best and spookiest capers. It's no mystery that you're in for a classic good time!