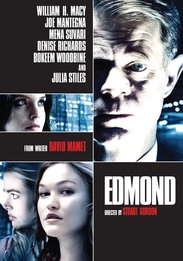 After visiting a fortune teller, Edmond realizes his life is not the one he desires. He decides to flee his previous existence and pursue a new life. Edmond meets a man in a bar who gives his advice that launches a series of mishaps that ultimately guide him through the search for his humanity.

Rated R for violence, strong language, and sexual content including nudity and dialogue.