Faith of My Fathers: The John McCain Story 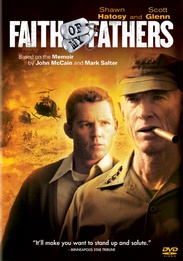 Based on the autobiography by Senator John McCain and Mark Salter, Faith of My Fathers chronicles the younger years of Senator McCain's life. Beginning as a hotshot Navy pilot through his five yearsof captivity as a prisoner of war in North Vietnam, the film captures how his experiences helped shape the man that he has become.