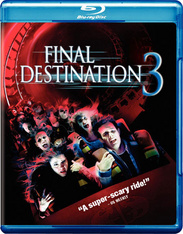 When a high school student fails to stop the fated roller coaster ride that she predicted would cause the deaths of several of her friends, she teams with a schoolmate, in a race against time to prevent the Grim Reaper from revisiting the survivors of the first tragedy.

Rated R for strong horror violence/gore, language and some nudity.