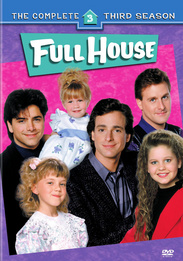 New additions to the Tanner household, birthday parties at gas stations, bullies at school, death-defying stunts and more! Join the Tanners once again for another hilarious season of Full House. Watch as DJ hides out with her first bout of acne, Michelle starts school, Stephanie drives Joey's new car and the men compete to see who's the most athletic of them all. Don't miss the latest antics of the Tanners in the complete third season for the first time ever on DVD!