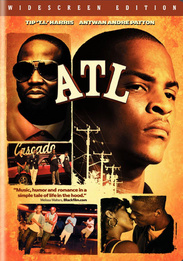 ATL tells the story of four teens coming of age in a working class Atlanta neighborhood where hip-hop music and roller skating rule. As the group prepares for life after high school, challenges on and off the rink bring about turning points in each of their lives. The film is loosely based on Dallas Austin and Tionne Watkins' experiences growing up in Atlanta and hanging out at a local skating rink called Jellybeans.