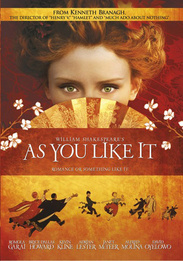 Emmy award winner Kenneth Branagh, the man who redefined Shakespeare for a whole new generation with Henry V, Much Ado About Nothing and Hamlet, brings the Bard's most delightful comedy to sensational life! Rosalind is a young woman living in the court of her uncle when she falls in love with Orlando, a young gentleman of the kingdom. When Rosalind is banished, she flees into the forest of Arden disguised as a man...only to encounter Orlando who has also been exiled! But can she win his heart, disguised as she is? With a setting inspired by 19th century Japan and a star-studded cast including Kevin Kline (Dave, A Prairie Home Companion), Bryce Dallas Howard (Spider-Man 3, The Lady In The Water) and Alfred Molina (Spider-Man 2, The Da Vinci Code), AS YOU LIKE IT once again proves that all the world's a stage. Come enjoy!

Rated PG for violence and some sexual material.