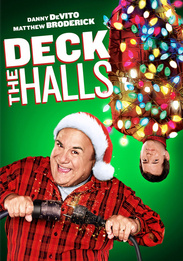 Matthew Broderick and Danny DeVito are hilarious as two neighbors trying to put the "win" in "winter" in one of the year's funniest comedies!

Determined to unseat Steve Finch's (Broderick) reign as the town's holiday season king, Buddy Hall (DeVito) plasters his house with so many decorative lights that it'll be visible from space! When their wives (Kristin Davis and Kristin Chenoweth) bond, and their kids follow suit, the two men only escalate their rivalryÂ­ and their decorating.

It's anybody's guess whether the holidays will wind up jolly or jostled in this wild and woolly laugh-fest that the whole family will love!

Rated PG for some intense sequences of violent action, some sensuality and language.