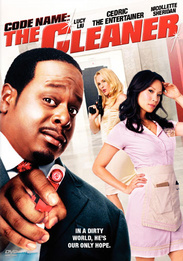 Action comedy Code Name: The Cleaner stars Cedric the Entertainer as Jake, a mild-mannered janitor with amnesia who gets himself comically entangled in a government conspiracy. Jake gets in over his head when he is duped into believing that he is an undercover agent who subconsciously holds a key piece of information that could expose an arms conspiracy involving the CIA and FBI.

Rated PG-13 for sexual content, crude humor and some violence.