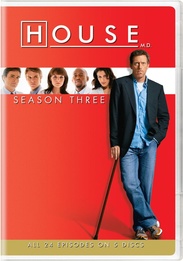 Two-time Golden Globe® Winner and Primetime Emmy® Award nominee Hugh Laurie is back making "House" calls in all 24 engaging episodes of this hit medical series! Dr. Gregory House (Laurie) still has the most unapologetically prickly bedside manner ever, but his genius for solving medical mysteries other practitioners can't has earned him the respect of his team. In this provocative and compelling season, House's unpredictable cases - from killer germs to killer secrets - strain his already tenuous relationship with his co-workers and put his own health at risk. Take the doctor's orders: make House: Season Three a habit!