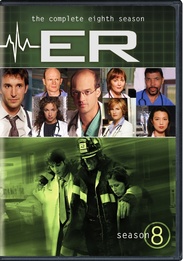 Excitement. Suspense. Joy. Grief. All in a heartbeat. Twenty-two of the best, most compelling hours on television unfold in this powerful, series-changing Season 8 of ER. New hopefuls  Army Reservist Michael Gallant and brash Gregory Pratt  arrive to face the challenges of Trauma One life. A familiar face  Dr. Susan Lewis  returns. Benton weighs career and family. Malucci crosses the line once too often. Chen defies demotion. And Greene fights what could be his last battle, leaving a void at the groups heart. His leadership may never be replaced. But someone must step into the breach. That someone is the doctor whos now been in the ER the longest  the former student who seemed to have the most to learn: Dr. John Carter.