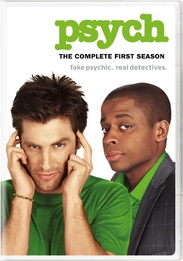 Fake psychic Shawn Spencer (James Roday) and his skeptical best friend Gus (Dule Hill) are on the case in the fresh and quirky runaway hit Psych! Relive every quick-witted remark and hilarious misadventure in all 15 Season One episodes, including both the domestic and international versions of the series pilot! Thanks to a childhood spent with a family of cops, Shawn possesses an incredible photographic memory and notices seemingly insignificant details. These traits allow him to spend his jobless days providing the police with mystery-solving tips - but his knowledge soon makes him a suspect. In order to clear his name, the unlikely sleuth declares that he has clairvoyant abilities and launches his own investigative agency, Psych. Exclusive bonus features in this must-own 4-disc set include a behind-the-scenes featurette, insightful character profiles and deleted scenes. Return to the scene of the crime with Psych, the phenomenon that the New York Post awards 4 stars and declares "just terrific."