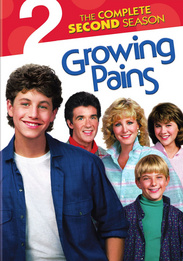 Congratulations... you're fired. Mike (Kirk Cameron) receives a car from his pleased parents after he's named Employee of the Month. (So how's he going to tell them he's been canned?) Mike's not the only one with secrets. Brainy Carol (Tracey Gold) wants everyone to think she has a romantic extracurricular life with a hunky football hero. And what's up with 10-year-old Ben (Jeremy Miller) and those 67 calls to a sex line? (No, it's not what you might think.) These events don't all happen at the same time, but they do all happen at the same place: the Season 2 home-sweet-ho-ho-home of the Seavers - dad Jason (Alan Thicke), mom Maggie (Joanna Kerns), and three on-the-go kids. Jason works as a psychiatrist. You think maybe it's time to add some family appointments to his calendar?