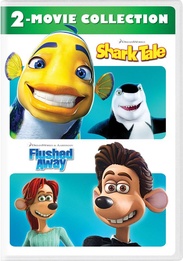 Shark Tale A pampered pet "society mouse" Roddy St. James (Hugh Jackman) thinks he's got it madeuntil he's literally flushed away to a bustling underground world of ninja frogs, hench-rats and singing slugs. As he tries to adapt to his surroundings and find a way to get out, he meets an enterprising scavenger Rita (Kate Winslet) and a villainous Toad (Ian McKellen) that takes him on an unforgettable journey! Flushed Away Oscar (Will Smith), a lowly tongue-scrubber at the local Whale Wash, becomes an improbable hero when he tells a great white lie. To keep his secret, Oscar teams up with an outcast vegetarian shark, Lenny (Jack Black), and the two become the most unlikely of friends. When his lie begins to unravel, it's up to Oscar's loyal friend Angie (Renée Zellweger) and Lenny to help him stand up to the most feared shark in the water (Robert De Niro) and find his true place in the reef.