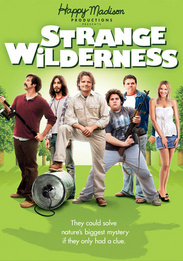 After the genial, beloved TV host of the popular wildlife show "Strange Wilderness" passes on to the great nature special in the sky, his son Peter Gaulke takes over the series - and things are never the same. Ignorant, bumbling and blissfully unaware of his own lack of talent, Pete sprinkles his documentary narrations with dubious factoids.

When the ratings sink to an all-time low and the show is about to be cancelled, Pete and his filmmaking partner Fred Wolf realize they have to come up with "something big" to save the series. It looks like they've hit the jackpot when Pete lucks into a map of the legendary Bigfoot's secret cave. But when the clueless producer leads his ragtag crew to the wilds of Central America to film the elusive beast, they encounter a string of disasters.

Desperate for a stunt to drive "Strange Wilderness" ratings back up and salvage the show, Pete brainstorms with his motley crew. Their luck seems to take a turn for the better when Pete gets a visit from his father's backwoods survivalist friend Bill Calhoun, who offers to sell him a map to Bigfoot's jungle hideout. Convinced this is the big break they've been waiting for, Pete and Fred hire two new crewmembers, Bill Whitaker and Cheryl, and set off for Ecuador in their dilapidated RV.

From the start, however, the ambitious expedition is beset with disasters. Along the way, the hapless crew will have to survive near-death encounters with overzealous border guards, an amorous turkey, flesh-eating fish, murderous natives and a host of other obstacles that more than live up to the name "Strange Wilderness."