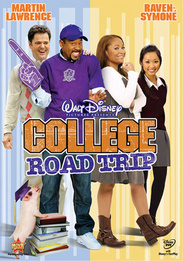 Choosing which college to attend can be the most exciting and thrilling time of a young woman's life...unless your overprotective father isn't quite ready to let you go. In the Disney family comedy, COLLEGE ROAD TRIP, Melanie (RAVEN-SYMONE) is eagerly looking forward to her first big step towards independence when she plans a "girls only" road trip to check out prospective universities. But when her overbearing police chief father (MARTIN LAWRENCE) insists on escorting her instead, she soon finds her dream trip has turned into a hilarious nightmare adventure full of comical misfortune and turmoil.