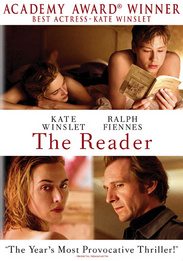 The Reader, set in post-WWII Germany, follows teenager Michael Berg as he engages in a passionate but secretive affair with an older woman named Hanna (Winslet). Eight years after Hannaâs disappearance, Michael is stunned to discover her again as she stands on trial for Nazi war crimes. The Reader is a haunting story about truth and reconciliation and how one generation comes to terms with the crimes of another.

Rated R for some scenes of sexuality and nudity.