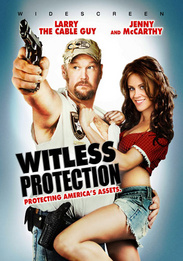 Larry the Cable Guy returns for another comic misadventure as a small town sheriff who unwittingly gets involved in a high profile FBI case in Lionsgate's new comedy, WITLESS PROTECTION. During a routine day spent patrolling his small town, Larry witnesses a beautiful, high-class woman, Madeleine, being held against her will by four mysterious, black-suited men. Recognizing the opportunity to save the day, Larry "kidnaps" her, only to learn that Madeleine is actually a key witness in a high-stakes Chicago crime case and her captors are FBI agents assigned to protect her. Madeleine is furious. But Larry, who rightly suspects the agents are crooked and Madeleine is in danger, forces her on a harebrained trip to Chicago to solve the case himself. Together, the hilariously mismatched duo must grapple with angry FBI agents, quack doctors and Chicago high society in his funniest, most unpredictable adventure yet.