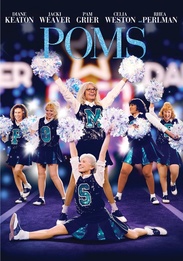 POMS is an uplifting comedy about a woman (played by Keaton) who moves into a retirement community and starts a cheerleading squad with her fellow residents, including Pam Grier and Jacki Weaver.