See the first photo from 'Get Smart'

Warner Bros. has provided USA Today with the first photo of Steve Carell and Anne Hathaway in the Get Smart big-screen adaptation. They take over the Maxwell Smart and Agent 99 roles made famous by Don Adams and Barbara Feldon in the '60s TV series.

Fresh off his Oscar win for Little Miss Sunshine, Alan Arkin will play the chief of the spy agency CONTROL where Smart and 99 are employed. Dwayne 'The Rock' Johnson and Terence Stamp are reported to have roles in the movie as well. Tommy Boy (1995) and

The Longest Yard (2005) director Peter Segal is helming the film. He confirms to USA Today that famous gadgets from the show like the shoe phone and Cone of Silence will be in the film. 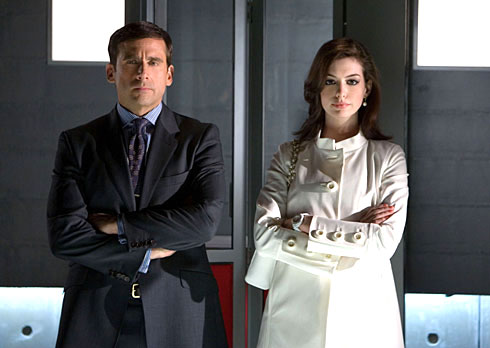