Hey, we're back with another round of new DVD announcements. Click on each for more information and to sign up for a handy DVD release reminder. Free of charge, we'll send you an email when the DVD you're interested in is released. No fuss, no muss.

Remember The Boz, Brian Bosworth? The mohawk-coiffed Boz was a promising football player from the University of Oklahoma. He had to retire from the NFL after just three seasons due to an injury. Bosworth then tried his hand at acting but that career was nearly as shorter-lived. Stone Cold was his first role. (A few other forgettable action flicks followed but none were as big as this one.) Luckily for Sooner and Seattle Seahawk fans, the moviewhich has now risen to cult statuscomes to DVD on June 12. 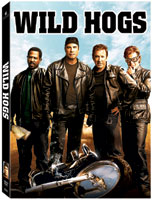 It's hard to believe but this mid-life crisis comedy has made over $160 million at the box office. The surprise hit starring a wanna-be motorcycle gang of Tim Allen, John Travolta, Martin Lawrence, and William H. Macy rides to DVD on Aug. 14. Bonus features include writer and director commentary, a deleted scene, outtakes and the hilariously-named featurette "How to Get Your Wife To Let You Buy a Motorcycle."

The Sandra Bullock thriller Premonition is coming to DVD on July 17. No word yet if it'll be a special edition. However, we do have a good premonition that it will have a commentary track, deleted scenes (including alternate ending) and the always entertaining blooper track.

The Christmas-themed teen flick Unaccompanied Minors is coming to cool down your summer on Aug. 7. For bonus features, it will have writer-director commentary, additional scenes, and more dance moves from Tyler James Williams.

Sting called Peaceful Warrior "an inspiring film that could change lives" so you know you'll want to watch it when it comes to DVD on June 26. The true story based on Dan Millman's "Way of the Peaceful Warrior" book will include a book-to-screen feature where you can do just thatjump from a passage in text to on-screen action.

We'll be back next weekthe good Lord willin' and the server don't crashwith more new DVD announcement fun. See ya then!