Have you noticed any weirdness with our site over the past couple of days? Well, let's just say we've had some growing pains. Thankfully it should all be behind us now. So let's dive into another batch of notable new DVD announcements!

You know the drill by now. These are some prominent new announcements of upcoming DVD releases. We tell you about them first because we like you best. Yes, you.

As one of our very favorite persons, you can click on any of these movies below to sign up for a free reminder once it hits the streets. Just consider it another one of life's perks for being you.

The break-out hit of this TV season, Heroes, lands on DVD in a superhuman release on Aug. 28. The seven-disc set is packed with some revealing bonus features, including five featurettes, over 50 deleted scenes plus the 73-minute Tim Kring (the show's creator) cut of the original series premiere that has never aired on TV and more. There's even a never-before-seen character in that version of the pilot.

The Anthony Hopkins-Ryan Gosling legal thriller Fracture comes to DVD on Aug. 14. Both the widescreen and full-screen formats contain deleted scenes including two alternate endings. (Isn't it a little unsettling when they offer up so many endings for a movie? Just give me one and I'll decide if I like it or not.) 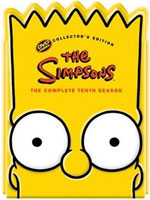 Like the Energizer bunny, The Simpsons just keep going and going and going... The Tenth Season of the beloved show is coming to DVD on Aug. 7. That'll be just after the release of the big screen movie in theaters. The Simpsons Movie debuts July 27 -- there will be a free movie ticket in this DVD as well as specially marked packaged of previous seasons' DVDs.

Speaking of TV on DVD, season four of the FX drama Nip/Tuck comes to DVD on Sept. 4 -- the same day as the season five premiere. It will be available simultaneously on DVD, Blu-ray, and HD-DVD. There will be unaired scenes, featurettes, and a gag reel on all editions.

The second season of the animated Foster's Home for Imaginary Friends, the Cartoon Network hit, comes to DVD on Sept. 11. For any young-at-heart cartoon fans who've yet to watch this show, I highly recommend it. It's a lot of fun. Season two is when they added the character known as Cheese.